Record #0174: Dream a Little Dream of Me / It Couldn’t Happen To a Sweeter Girl – JACK OWENS 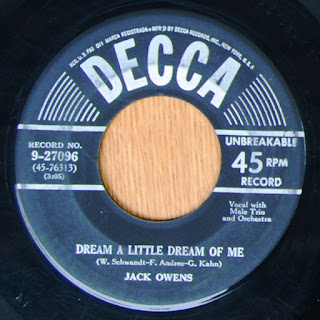 This could have been something like “the song of the summer” in 1950, when seven recordings of it were released. The other six were done by Louis Jordan, Vaughn Monroe, Ella Fitzgerald, Frankie Laine, Dinah Shore and Bing Crosby & Georgia Gibbs (duet). The original recording was done by Ozzie Nelson (the father of Ricky Nelson) in 1931.

Other well-known cover versions of the song were released by Doris Day, Nat King Cole, Louis Armstrong, Barbara Carroll, Dean Martin and The Mamas & the Papas (with Cass Elliot on lead). Michael Bublé has done a cover of it as well.

List price:  Not listed in Goldmine catalog. Apparently this is fairly rare, but I don’t think there’s too much collectors’ demand for the record.
Posted by T-Recs at 5:46 PM

Email ThisBlogThis!Share to TwitterShare to FacebookShare to Pinterest
Labels: Artist O, the 50's