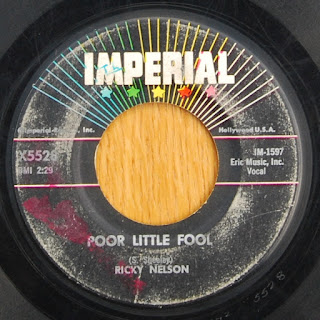 Unlike all other singles Nelson released with Imperial, this one didn’t come with a picture sleeve. Nelson objected the release (as the songs were just released on an EP) and as a protest he used his contractual right not to give a picture for the sleeve.

Sharon Sheeley wrote the title song after her break-up with Don Everly. Her next (famous) relationship was with Eddie Cochran for whom she also wrote many songs.

Email ThisBlogThis!Share to TwitterShare to FacebookShare to Pinterest
Labels: Artist N, the 50's