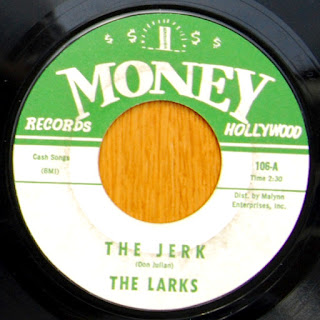 This vocal group was formed as the Meadowlarks by Don Julian in the early 50’s, when most R&B and doo-wop groups seemed to have bird names like “the Crows” and “the Robins”. This group was basically Don Julian plus other members frequently joining and leaving.

Though Julian & co. made their first record already in 1954, they were fairly unknown nationally until “the Jerk” / “Forget Me” came out. The early 60’s scene was filled will many dance crazes, like the Twist, the Watusi, the Mashed Potato, the Monkey, the Dog, the Monster Mash, the Hully Gully, and the list goes on. The Jerk became the latest dance craze in 1964-65 and once the Larks had a hit record in their hands they tried to ride on with the same recipe. To their disappointment their follow-up songs like “Soul Jerk”, and “Mickey’s East Cost Jerk” didn’t really go anywhere.

Some of the Meadowlarks singles are really valuable. If you happen to find something like "LSMFT Blues / Pass the Gin" (1954, RPM 406) at a flea market or any other place with fair prices, go for it. That particular one is listed $1500 for a VG+.

Email ThisBlogThis!Share to TwitterShare to FacebookShare to Pinterest
Labels: Artist L, the 60's