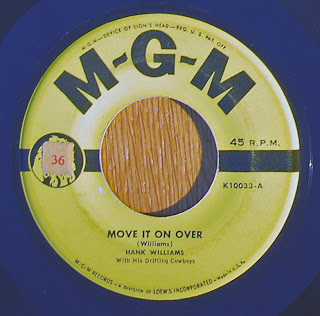 "Move It On Over" is one of my favorite Hank Williams songs. Absolutely great! Many elements of rock'n'roll music can be heard in this song and it's widely considered to have been very influential to the early steps of the genre.

The session was run very early in Williams' recording career; his first session with a full band was just about four months before this. Yet, that doesn't show in any way here. It's like Hank was a full pro from the get-go.

Gotta love the slap bass during the first solo! :)

The original 78 rpm issue of this record came out already on Jun. 6, 1947. It was the first US Country Top 10 hit for Hank Senior.